Yare vs. Yera vs. Yere vs. Yiri

There are a lot of things that speakers of a language take for granted. Because some aspects of the languages we speak come to us so naturally, we tend to intuitively assume it’s as easy to everyone else.

Before I started teaching Twi, I’d never had thought for a second that the Twi words “yare”, “yera”, “yere”, and “yiri” would confuse anybody. But they do! So in today’s post, I want us to take a look at the meanings of the aforementioned words and, consequently, how they differ from each other.

The Twi word “yare” is a verb. It means “to be sick”, or “to get sick”. Let’s look at some example sentences using “yare”.

So, I can say “meyare” to express ill-health as in example 1 above. But I can also express same with the rather idiomatic version “me ho mfa me (I’m not feeling well/I don’t feel well)”.

As a verb, “yare” takes all the appropriate inflections that similar verbs take. So we can have:

When we switch the vowel places of “yare”, we get “yera”, and while that is also a verb, it means something completely different from the former.

Let’s look at it in some example sentences:

As you can tell from the examples above, “yera”, as a verb, also takes the inflections that similar verbs would typically take.

Now, “yere” can mean two completely different things, from two distinct parts of speech. “Yere” can be a noun, or a verb.

As a noun, “yere” means “a wife”. The full form is actually “ɔyere”. As a kinship term, we form its plural form by suffixing “-nom” to it. I mean, to form the plural out of “yere” and, for that matter, almost all Twi kinship terms, you simply attach “nom” to the end of the respective kinship term and that’s it! So while “yere” is “a wife”, “wives” would be “yerenom”. You’ll find a more in-depth look at Twi plural formation in our proficiency program within our FLUENCY CLUB.

As a verb, “yere” means “to grab/hold firmly”. There are several instances where you’d use this verb, typical among which being when you grab hold of someone, e.g. to demand money that he/she owes you. But it’s not just with human beings, you can also “yere” objects. For instance, let’s say you’re falling off a cliff and you grab hold of a tree branch on your way down, firmly. We can use “yere” to describe that. Let’s see some example sentences.

Following from the above meaning, “yere” can also simply mean “to tighten”. We use this to mainly talk about the tightening of knots, spells, etc.

To the last one, “yiri”. This is also a verb. We use “yiri” to describe the action of a waterbody rising in levels/flooding. When the levels of a river, stream, lake, etc. rise considerably, or an area floods, it is the verb “yiri” that we use to convey that.

Follow me
Tikya Yaw
FOUNDER at LEARNAKAN.COM | LEARNAKANDICTIONARY.COM | LEARNAKANFLUENCYCLUB.COM
STEPHEN AWIBA, known here as YAW, is the founding editor of LEARNAKAN.COM and LEARNAKANDICTIONARY.COM. He was born and raised in Kumasi, the Ashanti regional capital of Ghana, where Akan (Asante Twi) is spoken as the first language. He holds a Bachelor's degree in Linguistics and Theatre Arts from the University of Ghana and an MPhil in English Linguistics and Language Acquisition from the Norwegian University of Science and Technology (NTNU).

Find LEARNAKAN useful? Please consider supporting us with a donation below.

If you check with any standard Twi dictionary, you will find that the Twi word “nsuo” means “water” in English. However, there are different kinds 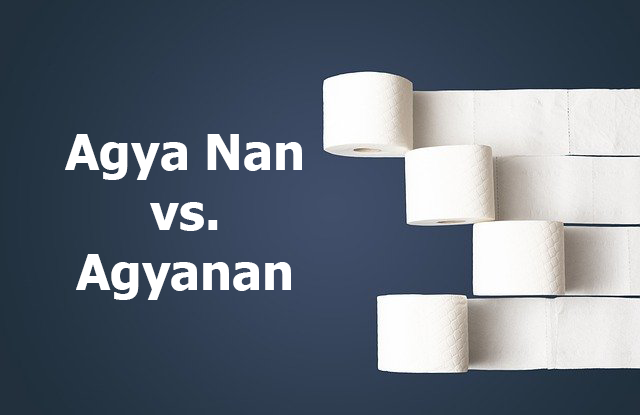 At the surface level, agya nan and agyanan look very similar. Heck, one might even pass as a typo of the other. But these two